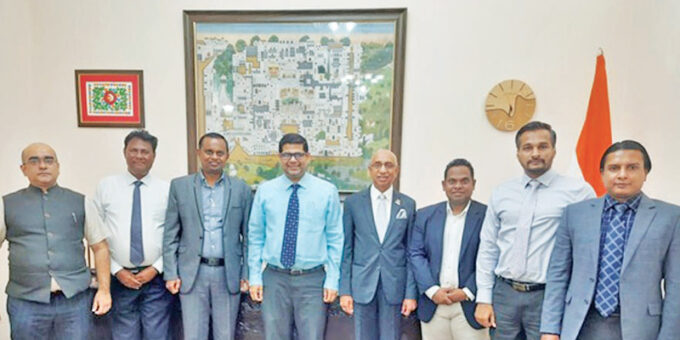 The Indian HC officials said that already UAE, France and Mauritius allowed Indians to use the INR and the local credit cards in their respective countries. In addition, Indian HC also indicated that they will see the Sri Lankan Rupees (SLR) to be used in India, a release from the FCCISL said.

“This will reduce the demand for USD which will be a direct benefit especially to Sri Lanka at this juncture and allow more spending which can directly benefit the businesses.” During the discussions they also pointed out the great potential to develop tourism which can benefit both the countries in a significant manner.

“In addition to tourism we discussed how to create benefits to both the countries using the Sri Lanka India FTA. Food security and energy security are two important areas of concern to both the countries and the Deputy High Commissioner assured the possibility of sharing the knowledge that India has in these sectors with Sri Lanka.”The Chamber officials had a very fruitful and cordial discussion with the Deputy High Commissioner of India Vinod K Jacob and the First Secretary Vivek Sharma. FCCISL and the Indian High Commission had a very close relationship over the years.

No comments to show.